Sapelo Island, Georgia, is in McIntosh County, and it is the site of the historic Hog Hammock Community, also known as Hogg Hummock.

Some historians believe Hog Hammock is one of the last intact island-based Gullah-Geechee communities in America. The island is accessible only by state-run ferry or private boat.

Cornelia Walker Bailey (1945-2017) was born on Sapelo Island. Her memoir, God, Dr. Buzzard and the Bolito Man, includes island folklore and stories about traditions that have survived the Middle Passage and the atrocities of slavery in America.

Mrs. Bailey had the opportunity to visit Sierra Leone in West Africa, with other Gullah-Geechee delegates, where they got to see and hear the many connections they share. The story of their journey is told in the documentary Family Across the Sea (see Films in this Research Guide).

Allen Bailey: Pride of Sapelo was produced by the Kansas City Chiefs and is on YouTube. This film won a Mid-America Regional EMMY Award in 2017. Allen Bailey was a defensive lineman for the NFL team. He now plays for the Atlanta Falcons. 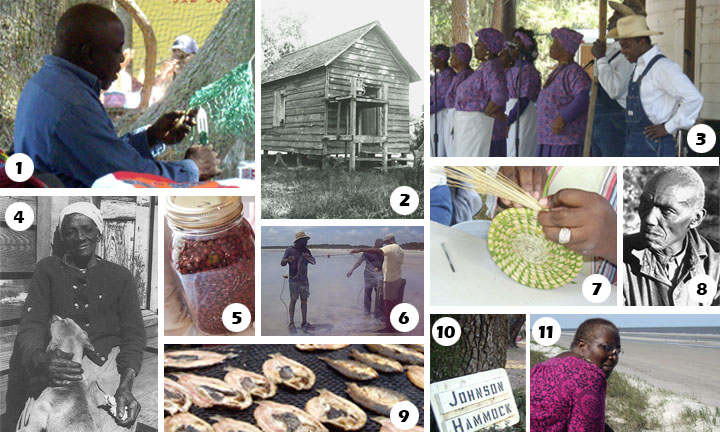 2. A "praise house" in the Hog Hammock Community on Sapelo Island.

6. Seine net fishing is a popular past-time on Sapelo Island today, but earlier generations relied on this technique to catch food for their families.

7. Sweetgrass basket-weaving is a tradition on Sapelo Island and throughout the Gullah Geechee Cultural Heritage Corridor.

8. Shad Hall often shared stories about life on Sapelo Island during slavery and as a free man.

9. Smoked Mullet is a traditional food on Sapelo Island and throughout the Gullah Geechee Cultural Heritage Corridor.

10. Johnson Hammock is in the southern area of the Hog Hammock (Hogg Hummuck) Community on Sapelo Island. It was founded by Isaac and Jane Johnson who moved to the island after Emanicipation.

11. Cornelia Walker Bailey (1945-2017) was a Sapelo Island native and activist for the preservation of her island community.

All photographs are by Michele Nicole Johnson except images 2, 4, and 8, which are by Muriel and Malcolm Bell.

"I am here to represent Sapelo Island, a little hammock on the Georgia Coast. It's a dying form of life we have here. In some ways I relish the new way while at the same time I feel such a heavy loss for the vanishing of the old ways."