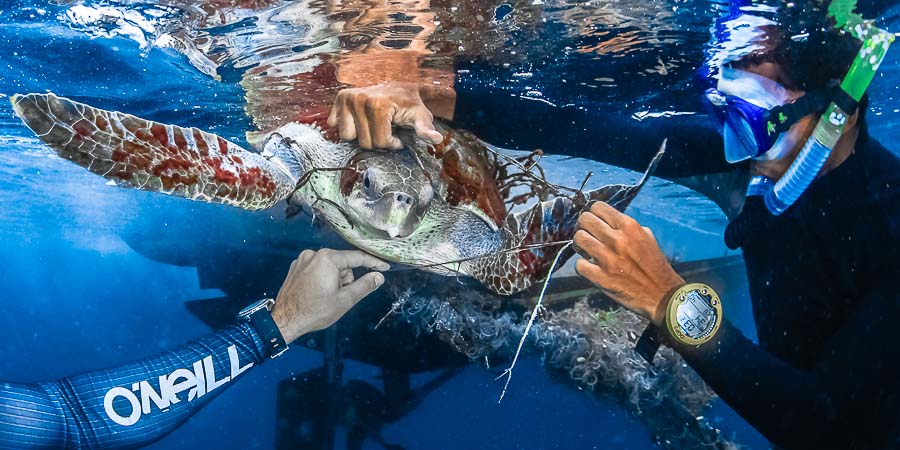 Threats in the Marine Environment

Turtles can become entangled in gillnets, pound nets, and the lines associated with longline and trap/pot fishing gear. Turtles entangled in these types of fishing gear may drown and often suffer serious injuries to their flippers from constriction by the lines or ropes. In addition to entangling turtles, longline gear can also hook turtles in the jaw, esophagus, or flippers. Trawls that are not outfitted with turtle excluder devices (TEDs) do not allow turtles to escape, which may result in mortality through drowning.

Fishing dredges, extremely heavy metal frames dragged along the ocean floor, can crush and entrap turtles, causing death and serious injury. In the Pacific, coastal gillnet and other fisheries conducted from a multitude of smaller vessels are of increasing concern. These fisheries, called artisanal fisheries, can collectively have a very great impact on local turtle populations, especially leatherbacks and loggerheads.

Marine debris is a continuing problem for sea turtles. Sea turtles living in the pelagic (open ocean) environment commonly ingest or become entangled in marine debris (e.g., tar balls, plastic bags, plastic pellets, balloons, and ghost fishing gear) as they feed along oceanographic fronts, where debris and their natural food items converge. This is especially problematic for turtles that spend all or significant portions of their life cycle in the pelagic environment (e.g., leatherbacks, juvenile loggerheads, and juvenile green turtles).

Environmental contamination from coastal runoff, marina and dock construction, dredging, aquaculture, oil and gas exploration and extraction, increased under water noise and boat traffic can degrade marine habitats used by sea turtles. The development of marinas and docks in inshore waters can negatively impact nearshore habitats. Fueling facilities at marinas can sometimes discharge oil, gas, and sewage into sensitive estuarine and coastal habitats. An increase in the number of docks built may also increase boat and vessel traffic. Turtles swimming or feeding at or just beneath the surface of the water are particularly vulnerable to boat and vessel strikes, which can result in serious propeller injuries and death.

Disease, specifically fibropapillomatosis (FP), is a major threat to green turtles in some areas of the world. FP is characterized by tumorous growths, which can range in size from very small to extremely large, and are found both internally and externally. Large tumors can interfere with feeding and essential behaviors, and tumors on the eyes can cause permanent blindness. FP was first described in green turtles in the Florida Keys in the 1930s. Since then it has been recorded in many green turtle populations around the world. In addition, scientists have documented FP in populations of loggerhead, olive ridley, and flatback turtles. The effects of FP at the population level are not well understood.

How some marine turtle species function within the marine ecosystem is still poorly understood. Global warming could potentially have an extensive impact on all aspects of a turtle's life cycle, as well as impact the abundance and distribution of prey items.

Threats in the Terrestrial Environment

Loss or degradation of nesting habitat resulting from erosion control through beach nourishment and armoring, beachfront development, artificial lighting, and non-native vegetation is a serious threat affecting nesting females and hatchlings. Although beach nourishment, or placing sand on beaches, may provide more sand, the quality of that sand, and hence the nesting beach, may be less suitable than pre-existing natural beaches. Sub-optimal nesting habitat may cause decreased nesting success, place an increased energy burden on nesting females, result in abnormal nest construction, and reduce the survivorship of eggs and hatchlings.

Beach armoring (e.g., bulkheads, seawalls, soil retaining walls, rock revetments, sandbags, and geotextile tubes) can impede a turtle's access to upper regions of the beach/dune system, thereby limiting the amount of available nesting habitat. Impacts also can occur if structures are installed during the nesting season. For example, unmarked nests can be crushed or uncovered by heavy equipment, nesting turtles and hatchlings can get caught in construction debris or excavations, and hatchlings can get trapped in holes or crevices of exposed riprap and geotextile tubes. In many areas of the world, sand mining (removal of beach sand for upland construction) seriously degrades and destroys nesting habitat.

Artificial lighting on or near the beach adversely affects both nesting and hatchling sea turtles. Specifically, artificial lighting may deter adult female turtles from emerging from the ocean to nest and can disorient or misorient emerging hatchlings away from the ocean. Hatchlings have a tendency to orient toward the brightest direction, which on natural, undeveloped beaches is commonly toward the broad open horizon of the sea. However, on developed beaches, the brightest direction is often away from the ocean and toward lighted structures. Hatchlings unable to find the ocean, or delayed in reaching it, are likely to incur high mortality from dehydration, exhaustion, or predation. Hatchlings lured into lighted parking lots or toward streetlights can get crushed by passing vehicles.

Did you know that the first excluder device was invented by a shrimper in McIntosh County, Georgia?

Sinkey Boone (at left, with two TEDs) invented it in 1968 to keep cannon ball jellyfish out of his nets. Since then, researchers have partnered with stakeholders in the fishing industry to create more devices to reduce non-target species, known as bycatch, caught in nets.