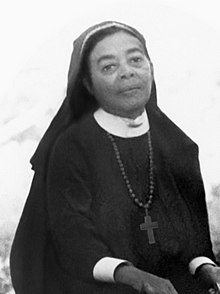 Deaconess Anna Ellison Butler Alexander (1865-1947) was born to people who were formerly enslaved by the family of Major Pierce Butler on Butler Island in McIntosh County, Georgia. She was an educator and the first and only African-American consecrated in the Episcopal Church.

Deaconess Alexander taught public school in Pennick, Georgia, and at St. Cyprian's in Darien, Georgia. In 1894, the Deaconess founded a mission and school for African-Americans in the Pennick Community in rural Glynn County, Georgia.

The Church of the Good Shepherd's school in Pennick would teach generations of students to read and write and instill the values and beliefs of the Episcopal faith. Many of her students went on to attend historically black institutions throughout the South, including the Deaconess' alma mater, St. Paul Normal and Industrial School, which became St. Paul's College, in Lawrenceville, Virginia.

In 1998 the Episcopal Diocese of Georgia recognized Deaconess Alexander as a saint.